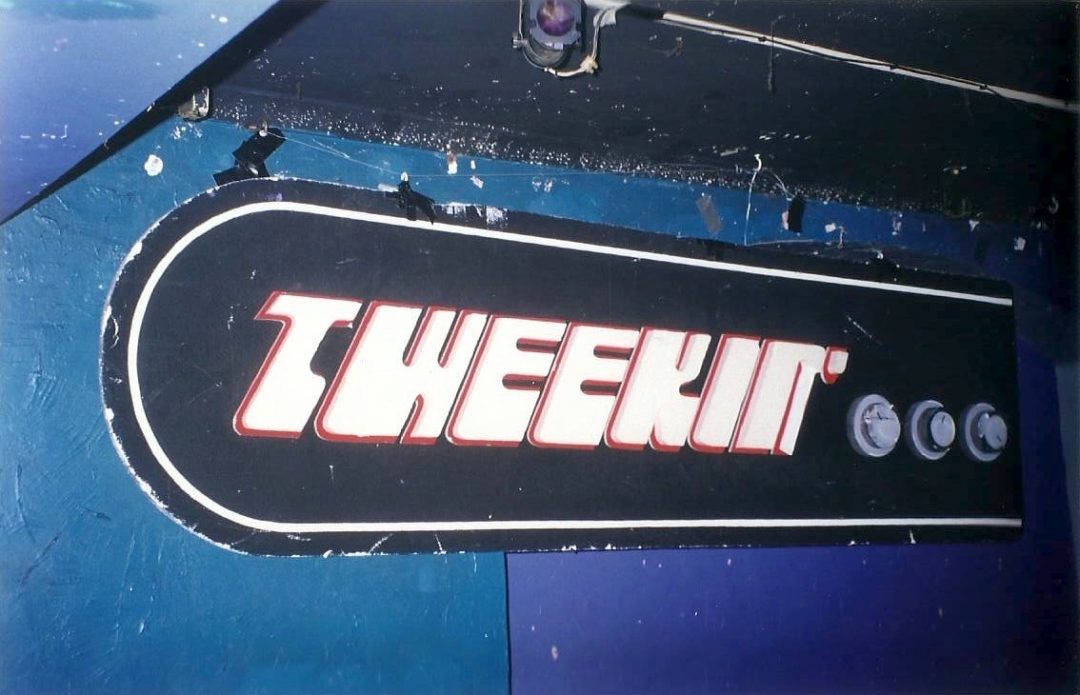 On the eve of the second Tweekin reunion, I felt the need to get some words down about this seminal piece of Sydney club history, a night that holds a special place in many hearts, including mine. For those who weren’t there at the time, Tweekin was a club night that happened every Friday night at Club 77 on William Street in East Sydney, a place we affectionately called the dirty little disco basement. It ran for four years before closing up on a very high note on the night of Friday 27 April 2001.

Tweekin evolved out of a night called Jus Right that Sugar Ray and I had been doing at Club 77 for a couple of years already. In fact we’d done a bunch of stuff there when it was still known as the All Night Boogie Dance Café. I was spending a lot of time overseas at that time, so Ray took over the Friday nights on his own and rebranded it as Tweekin and I continued on as resident DJ whenever I was back in Australia, along with Ken Cloud and our unofficial fourth resident who always stepped in when Ray and/or I were travelling, the one and only Ajax (RIP).

What made it so special? Well, it was a lot of things. Firstly, it was truly about the music. We played a broad spectrum of music, a philosophy with its roots in the Balearic attitude of the early Sydney rave scene, and the Hordern parties before that, where an eclectic approach was welcomed and appreciated by the dancefloor. The music crossed a lot of genres, and we saw movements come and go, from Tech House (in the original sense, on labels like 20:20 Vision and The End) to Breaks (Marine Parade and TCR) to West Coast House (Siesta and Grayhound) to quite banging techno (Primate and Hybrid) to the European sound of Pssst records, the emergence of minimal from German label Perlon and the edgy Berlin sound of one of my favourite labels of all time, BPitch Control.

This was reflected in the range of guest DJs that graced the decks at the club too, a very long list that includes Adam Freeland, Rennie Pilgrem, Freq Nasty, Thomas Schumacher, Christian Smith, Mr C, John Tejada, Chris Duckenfield, Clive Henry and our other semi-resident Andy Morris, not to mention every local DJ worth his/her salt, a list too long to even attempt here. We also featured a lot live acts, including Infusion, Pocket and others on the Thunk roster.

Add to that the history of inclusion that Sydney had often fostered, again through the rave and mixed gay/straight scenes of the late 80s, and a conscious intention to make it a safe place for everyone, a place that so many of the girls commented along the way that it was one of the few places they could go to and just dance, without getting hit on all night. We took that as a badge of pride.

It also went against the exclusive aspect of some Sydney clubs with their style enforcers; at Tweekin it didn’t matter what you wore, and you would even see the odd fellow in a suit who stumbled in to the club somehow and blagged their way past the doorman.

It was dark, dirty and dingy. The sound system wasn’t great. Either were the lights, but we always had a lighting operator working the buttons and smoke machine. This was in the days when you could smoke in clubs too, so you always came home stinking of ciggies, and in contrast to the nanny state we live in today, you could walk down the street without the worry of the doggies and we managed to get away with smoking copious amounts of spliffs behind the DJ booth as well, where there was a conveniently situated couch. Pure dingy club bliss. 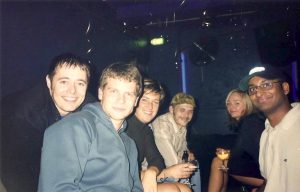 The club also received accolades and recognition from the wider dance music community. It won club night of the year at the inaugural national dance music awards in 2000, and was famously listed by DJ Mag in the UK as on the “very short list of proper clubs around the world”.

At the end of the day though, it really came down to the totally up for it and unpretentious crowd, hungry for new, genre bending music. The dancefloor made Tweekin, and quite honestly when people ask me what my favourite club I’ve ever played at in the world is, there is only ever one answer.

I thought it might also be fun to include the interviews conducted with the residents around the time of the first Tweekin Reunion in 2015. 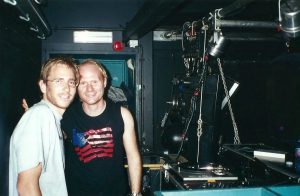 What does Tweekin mean to you, then and now?

Then… Tweekin was a community, an amazing family of like minded party people and music freaks, rocking guest DJs and live acts, a truly special place and time in Sydney’s clubbing history .

Now… to be honest I was a little reluctant to do it as I had closed that chapter in my life and wasn’t sure about reopening it and letting the Sugarman out the box. But Philly has been chipping away and convinced me, and once I had committed and started listening to my records again I got super excited, the passions returned and I’m really looking forward to DJing again and catching up with the everyone.

Playing the Man with the Red Face by Laurent Garnier for the first time, I managed to grab one of the first copies (it helped owing a record shop, RIP Reachin) and wow what a reaction on the dance floor!

Wow as a DJ you could not ask for a more open minded, forward thinking and enthusiastic group of people to play for, looking back it was a real honour and privilege.

We had many great guests… locally, Young Jase & Simon Caldwell were always great, and from overseas, DJ Dan & Adam Freeland stand out for me, but my favourites were the residents Ajax, Kenny & Philly, they were consistently awesome week in week out.

What does Tweekin mean to you, then and now

Tweekin is hands down the best club I’ve ever played. Being a weekly residency, it really let you develop trust with the dancefloor and get creative as a DJ. It also had a real community spirit to it. One of the main reasons I was up for doing a reunion is there were such great people there, with such positive vibes. To me, it was an important social and cultural thing.

No proper conversation can be had about Tweekin without mentioning Ajax (RIP), the man who was essentially our fourth resident, and kept the vibe alive with Kenny when Ray and I were travelling overseas. One of my lasting memories is when he was going through a dress up phase and I can picture him in my mind completely rocking it to the sweaty rafters while wearing a dress. Legendary.

That was the best thing about it, everyone was chill, it was casual and people were really there for the music. I made a lot of great and long lasting friendships directly from the club and I know plenty of other people did the same. So many people I know met there, and some of them even went on to get married and have kids. Oh yeah, and then there’s the ever changing motley back row crew on the bench behind the DJ booth, that was always interesting!

There were so many great DJs that played, and to be honest, with all the years we spent throwing parties at 77, from Sabotage to Jus Right to Tweekin, I sometimes can’t remember who played what. One of the most memorable nights, and I’m not sure if it was Tweekin but it was definitely Club 77, was when Michael Mayer played. He was playing such amazing music and I was so excited to finally hear him play that I gave up my set to let him keep playing. Epic night.

Christian Smith played a few times, and he was always great. Lots of techno then. I’m pretty sure Adam Freeland played at least once as well. I’m sure the Tweekers will be able to fill me in on some more of their favourites, darn hazy memory! 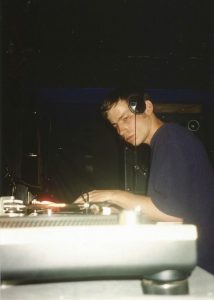 What does Tweekin mean to you, then and now

Tweekin then was my Friday night, I was very lucky that Ray gave me the opportunity to be working at Reachin’ during the week and then play at Tweekin on the weekend, I was trying to find my way in Sydney as a DJ and luckily I was in the middle of it all, I was exactly where I wanted to be. At the time Friday night in Sydney was rocking with us and the Stateside crews leading the way. Looking back it was obviously a very special time, the club was always busy, people came to dance and the floor filled up quick, people would walk down the stairs and straight on the dance floor. I’ve got very found memories of both 77 and the Metro parties, the dance scene was more underground back then. I learnt a lot about DJing from Phil.

Its been so long ago that I think my mind has dispelled any memories that were remotely negative so its just a great big blur of wonderful goodness, which I don’t think is too far from the truth. When you get the dance floor at 77 really going its a lot of fun – its one of those clubs where the whole place is just dancing.

This is an absolute impossible question to answer, I think almost everyone I know over a certain age spent a chunk of time down at 77. There are a lot of people too that I’ve become friends with since 77 that said they spent a lot of time down there but I didn’t know them at the time. For any successful weekly you do need a dedicated core crew, and we had loads of great people, there are too many to try and remember.

My favourite guest DJ was Joel Harrison, he wasn’t well known although he did have some records out, but we knew him as he is the brother of Tim Harrison who was involved with Thunk Records. He played a bunch of crazy old techno and house things in an early Environ, Morgan Geist vein (before he went Metro Area vibes) and the place just went crazy. I can remember Lorna rocking the place too.

This is pretty fuzzy but…