Al is resident DJ and promoter of the Coco Republic parties that have grown to become an institution for underground house music and decadent good vibes in Byron Bay. Originally from the UK, Al’s been spinning deep funky house since 1992, learning the trade in the thriving party scene of Nottingham in the 90s, spending weekends in muddy fields in front of rows of bass bins which inspired his flavour of bassline driven house with a touch of tech and soul. He is a also believer that good music needs to be heard from a good system which is why he wheels out his own Funktion One system for the Coco parties…its all about the bass!

When/where/how/why did you start DJing and producing?

I had an early interest in electronic music when I bought Afrika Bambatta and a couple of Nucleus 12s  from Magpie Records in Worcester when I was 12. I also collected these great UK Electro tapes which were mixed and just got me. But it wasn’t until 92 when I went to a big free party called Castlemorton that my eyes and ears opened to the free party scene and later that year when I moved to Nottingham for Uni I really heard deep house from the US and I was sold. I jumped on a mate’s decks, picked it up straight away and from then on all my money went on records! Some mates and I quickly formed a crew (Giddy Fruit) and we started holding after parties after busy local club nights, often not switched on until 3am and that’s where I learned the trade. 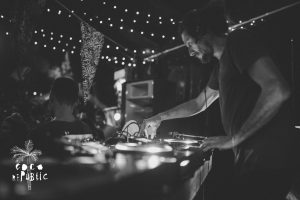 I know you were once part of the legendary DIY crew from the UK, what’s the story there?

I went to a few of their nights and free parties and they just blew my mind both musically and in vibe. DiY are crew of students, DJs, hippies, designers and animal rights activtists  from Nottingham who committed to holding the best free parties possible. It was a huge family of crew that loved deep house, big sound systems from all walks of life but all end up getting down in a muddy field. They were and still are a major influence on me for how I throw parties and present and play music. The Smokescreen Soundsystem crew took over where DiY left off and their style was rows of bass bins and deep tech grooves in muddy fields which again influenced how I approach sound systems. I worked for DiY in the office selling records and was paid 50 quid a week and studio time – I worked with this crew that were 100% committed to underground music.

What brought you to Byron Bay?

I visited one of my best mates here, an OG member of Giddy Fruit, who’d moved here with his Aussie chick and I instantly felt at home here. I felt that, if you’re different, you fit in and that really felt right to me. I lived in a few other places in Oz before settling here and have been here for 10 years. Happy!

What are your hot tips of places to check out next time we’re there?

Obviously check out our Coco Republic parties, they are really something I’m proud of and they go OFF! Last year La La Land changed hands and became Locura with the music being run by a genius DJ/promoter/producer Jono Ma who has brought a real commitment to excellent house music in Byron. Other great nights to look out for are Bare Foot Beat, Sabotage, Well Spent and also a new thing, Secret Garden. But there are so many crews starting their own house and techno nights, it’s buzzing and growing and there’s an underground community with a Do It Yourself attitude. 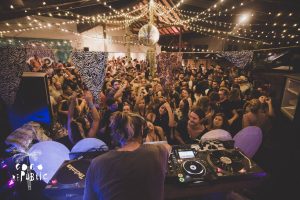 What music have you released over the years?

I have only one solo Al Royale release from 98, Giddy Heights on DiY Discs and a few other tracks released on that label and Mobile TRaxx. I’m more of a DJ than producer but it’s always on my to do list to do more haha. That release though took me to the States and South America and I’m so grateful to have had those experiences.

What’s your favourite place in the world to play music?

Good Question…It’s not about the place but the people and where I’m at in my heart. I’ve played big stages and not enjoyed it and had nights playing at home with just the future wife that are the best nights, so I guess whenever I’m flowing and feeling it. House music takes me out of my physical reality and into a place where it doesn’t matter where I’m at. I also love to get down and if I feel comfortable playing AND getting down then that’s the spot for me.. let’s see on the 23rd hey.

Can you tell us a crazy DJ story?

Oh mate one time we smuggled a sound system into Glastonbury in a truck using a band pass from a band that couldn’t go, and set up right near the dance tent… Security came over when we turned on the DiY rig (8K sound) and asked “how long you planning going on for”….we said “5 days”.. and they were like ok we’ll be over after we finish our shift. Daft Punk finished and we switched on. It was a legendary party. There are so many tales and many disaster stories such as spilling a pint in the record box of the guy I was taking over from as his last tune was being played in San Fran but I’ll save those for another day time.

What kind of vibes are you going to bring to Space Cadet?

I’ll be playing a few new vinyl bits if the decks are set up and bringing a blend of tunes I love and want to share. Basically house music but to put in a genre on it funky epherial, stripped down techy minimal shizwaz.

Frank Haag – A Dash of the Diabolical  (VBX)